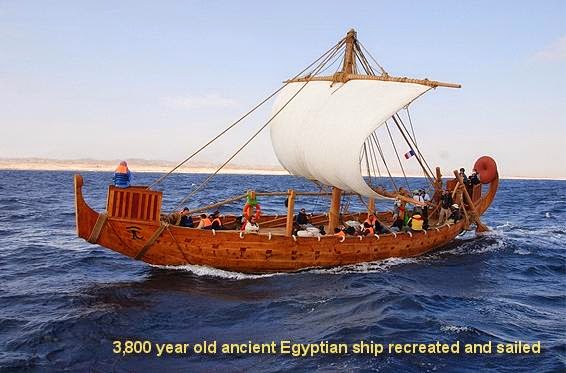 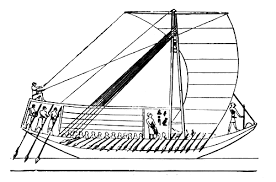 Because sails were made of easily perishable material, it is not known exactly when they were first used, but this is the oldest known picture of a ship with a sail. It is from an ancient Egyptian vase dated to about 3200 B.C. (From Studies in Early Pottery of the Near East, Vol. 1, by Henri Frankfort. London: Royal Anthropological Institute of Great Britain and Ireland, 1924)

The Egyptians can not be credited with inventing ships: Various people all over the world independently invented watercraft of all kinds. It so happens, though, that no other people left so much physical evidence of watercraft as they evolved across the centuries. Carvings, wall paintings, vase designs, textile designs, models—the ancient Egyptians left a wonderful record that probably reflects the evolution of watercraft among many ancient peoples.

Their earliest craft, like those of so many peoples, were probably only rafts made of reeds, and none of these have survived. But by at least 3500 B.C., they were shaping the reed into long, narrow boats: Numerous drawings exist that depict these early vessels, some with high prows and sterns, some with cabinlike structures, most with multiple oars. Then an Egyptian vase painting dated to about 3100 B.C. depicts a small sail on a boat—one of the earliest if not the earliest depiction of a sailboat.

Egyptian boats for the next few centuries continued to be made of reed and probably seldom ventured beyond the Nile River. By about 2700 B.C., however, the Egyptians were using wood at least to reinforce some parts of their reed boats—providing platforms to stand on, for instance. Most likely they very quickly began to make all wood boats. The Egyptians built them with planks of wood with no internal ribs or keel, and this basic form of construction at first produced flat-bottom, square-ended boats that were not much more than barges. And by about 1800 B.C., the Egyptians were building rivercraft more than 200 feet long and 70 feet wide to haul the heavy stone required for their monumental temples and other structures.

The Egyptians’ method of constructing boats—that is, building up a shell of planks rather than starting with a “skeleton” of a keel and frame—was used throughout much of the world for many centuries to come. But it does not seem to have limited the ancient Egyptians when it came to building the sleeker ships designed for open seas. As early as 2450 B.C., Egyptians were building quite trim wooden ships for sailing on ocean water, and the seagoing ships depicted in the reliefs at Queen Hatshepsut’s burial temple are estimated to be some 90 feet long. Egyptian seagoing ships had two features not required by river craft: a rope truss that connected the bow and the stern and could be adjusted like a tourniquet to keep the front and end of the boat from sagging; and a rope netting that encircled the upper part of the hull to keep the planks from separating under pressure from the deck and cargo.

Many of the Egyptians’ rivercraft depended on humanpower—rowing, paddling, poling—but sails were also used on many boats, either alone or with humanpower. At first the masts were simple poles, but as the boats became larger and required heavier sails, the Egyptians turned to “two-legged” masts: poles tilted from each side of the boat to join at their top ends. By 2200 B.C., however, the Egyptians had found a way to make single pole masts to support even the heaviest sails required for seagoing ships.

The typical vessel used during the reign of Pharaoh Sahure over 4500 years ago in Egyptian history was about 70 feet in length with a beam of about 25 feet and a depth of 6 feet. A bipod mast was typical with a square sail. The displacement, armament (if any) and complement are unknown.

During this time Egypt’s expanding interests in trade goods such as ebony, incense such as Myrrh and frankincense (used in their religious rituals), gold, copper and other useful metals inspired the ancient Egyptians to build suitable ships for navigation of the open sea. They traded with Lebanon for cedar and traveled the length of the Red Sea to the Kingdom of Punt, which is modern day Ethiopia and Somalia for ebony, ivory and aromatic resins.

Ship builders of that era did not use pegs (treenails) or metal fastenings, but relied on rope to keep their ships assembled. Planks and the superstructure were tightly tied and bound together.
Historical records and Egyptian art show that Pharaoh Sahure the second king of the 5th Dynasty established an ancient Egyptian navy and sent a fleet to Punt and traded with cultures in the Eastern Mediterranean. His pyramid illustrated his naval fleet and recorded his military career consisting mostly of campaigns against the Libyans in the western desert.

The squadron sent by Pharaoh Sahure to harry the Phoenician coast may have consisted of armed merchant ships rather than dedicated warships. The ships had neither keel nor frame – a strong rope stretched above the deck helped to maintain rigidity; other ropes and line secured the sides of the ship.

The best source for accurate information on the early Egyptian ships is SHIPS OF THE PHARAOHS by Bjorn Landstrom. Not only is the best information is this book, but there are also a number of plans of different Egyptian ships from different periods. The book is no longer in print, but copies can still be obtained for those who really want a copy. Check out abebooks.com or your local library.