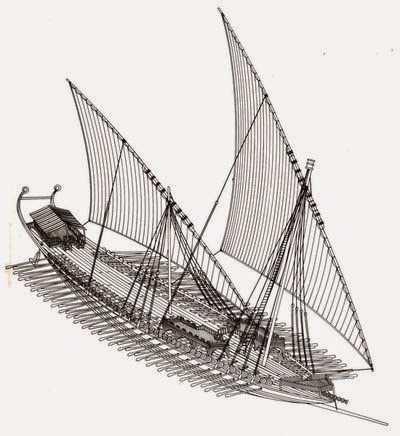 The standard Byzantine warship that employed both sails and oars. A typical 10th-century dromon had two banks of oars employing 200 rowers, in addition to a battering ram on the prow, and enough heavily armored marines to board an enemy ship if necessary. In other words, it looked and acted very much like the bireme of classical Greece. However, from the late seventh century on, the prow was a bronze-tipped siphon for discharging Byzantine napalm, the famous Greek Fire that proved decisive in so many battles. Hides and lead sheathing protected the ship’s sides against enemy incendiaries. Also new was a wooden tower amidships that allowed catapults and archers to launch stones, arrows, and other antipersonnel devices.

There are few images more representative of the Mediterranean Sea in the Early Middle Ages than that of the famous Byzantine war galley known as the dromon. At sea, the succession of the dromon to the Roman bireme liburna and its predecessors, especially the Greek trieres, has been presented in the conventional historiography of the maritime history of the Mediterranean as marking a transition from Rome to Byzantium. Similarly, the succession of the Western galea to the dromon in the late eleventh and twelfth centuries has been presented as marking a transition from the Early Middle Ages to the High Middle Ages in so far as the maritime history of the Mediterranean is concerned.


Behind this conventional presentation lie two intellectual assumptions which have underpinned the historiography. The first is that specific ship types, known by different names, existed in different chronological periods, or in different civilizations, and that these had distinctive construction features which either can be ascertained or, if they cannot be ascertained, would be able to be ascertained if sufficient evidence were available. The second assumption is that when the writers of ancient and medieval texts used terms such as trieres, liburna, dromon, or galea, they actually intended to refer to such specific ship types because these names were applied to the ship types by their contemporaries. Therefore, if a new name began to be used in the texts from a certain period, this reflects the fact that a new type of ship appeared in that period. Conversely, if a name faded from use in the texts in a certain period, then this indicates that the type of ship to which it referred had disappeared. It has been assumed that there were definite relationships between the words and the physical objects to which they referred, relationships which were both stable over long periods of time and also consistent in usage from place to place and person to person at any one time.


In certain periods Byzantines certainly referred to galleys by the term dromon, and also by chelandion and other terms, but did they always really intend that their use of these terms should actually designate specific galley types with distinctive design characteristics?

On the one hand, maritime historians know well that throughout history gradual evolution has almost invariably been the norm in so far as ship design is concerned. There has very rarely been any sudden technological innovation which has produced a distinctive new ship type overnight. Even submarines and aircraft carriers were developed gradually as new features were experimented with. Ship types have never remained static and fixed in design over time. They have always evolved slowly as generation after generation has progressively refined them and adapted them to changing circumstances. The evolutionary norm has been that eventually changes have become so marked that the ships have become distinctive new types which can be distinguished from their progenitors. Sometimes a previous name or term for a ship type has been taken into a new technological context; for example, the medieval Italian galeone for a small galley eventually became galleon for sailing ships of the sixteenth century. Sometimes a term for a ship type has been replaced by another term; for example, the Scandinavian knörr, which evolved in England into the Anglo- Norman buss. This being the case, we are led to consider whether “a” distinctive Byzantine warship, known as a dromon, ever actually existed at any time or whether, in fact, different forms of galleys over many centuries were referred to by Byzantines and others by the name dromon? There is no reason per se why the same term used in, say, the sixth century and the tenth, should not have been used with reference to quite different ship types. There is no reason, per se, why the same name should not have continued in use even if the construction features of the ships had changed dramatically.

On the other hand, when we examine texts which use terms such as dromon for ships, the reality for us lies in the texts and terms themselves. In most cases, we cannot see beyond the terms and cannot know whether two authors using the same term, even in the same time period, really had the same type of ship in mind. The same would true of the use of terminology in different geographical regions. Was a ship referred to as a chelandion in Byzantine South Italy in the tenth century really the same as that which was referred to by the same name in Constantinople? Futhermore, in most cases we cannot even know whether authors really even intended to refer to any specific ship type by their use of such terms. Indeed, in many cases, collateral evidence suggests that their use of them was no more specific than is that of “yacht” in our own time: a term which began with a specific reference to a seventeenth-century Dutch ship but which has since been applied to almost any kind of sailing pleasure craft. The popular use of “battleship” is another case in point. The word is correctly used for first-rate capital ships of the modern era of iron ships but is frequently used in popular literature with many other references. Nelson’s Victory, for example, is often referred to as a “battleship”; whereas, she was properly a “first-rate ship of the line”. Only if we had texts which empirically described the construction or operation of galleys referred to as dromones at any particular time could we be confident that we were being informed about actual ships in contemporary use, but even then only for that time and place and for those texts.


We have then approached the reality of “the” Byzantine dromon from alternative perspectives. On the one hand, from the sixth to the twelfth centuries, Byzantines and others certainly referred to some kinds of war galleys by the name dromo2n. On the other hand, real war galleys certainly existed. But, what did contemporaries intend their terminology to signify and what can we know of the physical objects to which they referred? Beyond that, with what degree of confidence can we use their texts to research the construction characteristics of the galleys and the ways in which they may have evolved over time?
Posted by Mitch Williamson at 3:30 PM