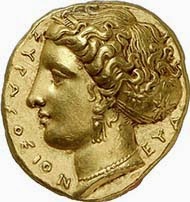 Coin of Dionysius I of Syracuse

Greek ruler who briefly conquered most of Sicily. Born c. 430 B.C.E. into a wealthy family of Syracuse (Siracusa, Italy), Dionysius had a career that combined ruthless political opportunism and autocracy with brilliant, innovative soldiery. He entered public life through both intrigue and military service, participating in Hermocrates’s abortive coup in 408 and fighting Carthaginian invaders in 406.After perfidiously convincing the Syracusan assembly that their generals were traitors, Dionysius became head of the Syracusan army and virtual ruler of the city in the next year. Immediately, he concluded a truce with the Carthaginians and brutally suppressed an aristocratic insurrection.

Three main opponents resisted Dionysius’s expansionist policies: Greek colonists, Carthaginians, and the native Sicel population. His mercenaries vanquished the Greeks and Sicels of eastern Sicily in 399. During this campaign, Dionysius introduced the catapult and the quinquereme, a five-man per oar-bank slice, three oar-banked warship, to Sicilian military practice. With little delay, he started the first of four Dionysian wars (398– 367) with Carthage. By the close of the Second Dionysian War in 392, Sicily was his except for the westernmost segment. Dionysius then led his troops into mainland Italy in 390, crushing the Italiote League and gaining mastery of Calabria as far north as Thurii (Sibari, Italy) by 379. He founded colonies on the Adriatic coast of Italy and raided the Etruscan port of Pyrgi (Santa Severa, Italy).
After the mid-380s, Dionysius’s fortunes declined somewhat. He became entangled in mainland Greek affairs, shifting his support from Sparta to Athens, the erstwhile enemy of Syracuse. Carthage defeated his armies during the final two Dionysian wars, resulting in territorial losses and military stalemate in western Sicily. His son Dionysius II succeeded him upon his death in 367. In subsequent classical literature, the elder Dionysius epitomized tyrannical excess and egotism.