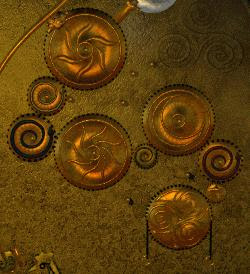 Navigation as we know it today was first practiced by Phoenician and Greek seafarers, beginning after the sixth century BCE. They navigated in the Red Sea and the Mediterranean in much the same way as Arabs, but had the advantage of sailing in an enclosed sea where land is never far off.

The first seaman of whom it is told that he steered by stars was Odysseus. At one stage, as he crossed the sea during his imaginary voyage, night after night he had to keep the stars of the Great Bear on his left hand. This was the method of steering by horizon stars. A star was observed shortly after rising (or before setting) and used as a compass direction. After a while the next rising (or setting) star, with more or less the same amplitude, was used to steer by in the same way and thus the ship was held on the same course without the use of a compass. During daytime the position of the sun was observed and used for orientation. Culmination (when the sun reaches its highest daily position in the sky) indicated the south (or north), while in low latitudes sunrise and sunset pointed to two other major compass directions, east and west. In northern latitudes the polestar, although some degrees off the celestial North Pole, observed in combination with the Great Bear, also indicated the north. South of the equator, experienced seafarers could, at least for a while, still use the Great Bear to locate the north. They also estimated their position with the use of phenomena observed around them, such as the direction and force of prevailing winds. At night zenith stars were indicators for their position relative to the northern and southern shores of the Mediterranean, while the altitude of the polestar and the sun at noon provided an indication of latitude. Knowledge of longitude was based on sailing times between the eastern and western shores of the Mediterranean. The magnetic compass was probably introduced on ships in the Mediterranean by crusaders, during the thirteenth century. Sea charts and sailing directions, still in manuscript, came into use in that area in the fourteenth century and after the art of printing was introduced in Europe a century later, these aids were used more generally.

In the early Middle Ages, Norsemen and Irish monks started to cross the North Atlantic Ocean toward Iceland. Because of the long Arctic summer, stars were of less use to navigation here than in southern latitudes. To estimate the position relative to the track to Iceland, the Shetland Islands and the Faeroes were used as “steppingstones.” These navigators also observed migrating birds, which showed them in what direction land was, and there is mention of Norsemen using ravens taken on board for this purpose. Seamen found that a group of clouds over the horizon indicated still-unseen land. When visible, Norsemen used the polestar for orientation at night, and the sun during daytime. They probably also used these celestial bodies for setting out their courses. The magnetic compass came into use in the north of Europe after it was introduced in the Mediterranean.

Navigation with specially developed scientific instruments, and tables with astronomical ephemera, dates from the time of the maritime expansion of Portuguese and Spanish navigators, in the fifteenth century. When the Portuguese embarked on their voyages along the west coast of Africa their courses were generally north-south. They found their latitude by observing the polestar at night, and during daytime from the sun’s altitude at noon. For their observations they used the mariner’s astrolabe, a navigating instrument that was developed out of the astronomical astrolabe, probably around 1445.The cross-staff, inspired on the kamal, and used for the same purpose, was introduced at sea about 1515. Beyond the equator, which was reached by 1474, the polestar is no longer visible. Although the Southern Cross had been seen by Portuguese seamen already in 1454, it was found that there was no southern polestar. It was then decided to try to improve the method of finding latitude from the sun’s altitude at noon. As a result the first day-to-day declination tables of the sun were compiled. When Columbus sailed towards America in 1492, he was provided with such tables in manuscript. Columbus was also the first to observe westerly variation. Variation is the angle between the directions of the magnetic and the geographic North Poles, and depending on the place on the earth, it can be easterly, westerly, or zero. As the position of the magnetic pole changes slightly over a year, the variation increases or decreases. It is important that, when setting a course, the value of variation is taken into account.

After the Atlantic Ocean was crossed, and the Indian Ocean in 1497, east-west courses were sailed more frequently, and the necessity to measure longitude was felt. The difference in longitude between two places can be expressed in the difference in time between the two. Columbus tried to find his longitude in the New World from observing a lunar eclipse, which he knew would also occur in Spain. He compared the local time of his observation with the predicted time it would occur in Spain. The effort failed because of the inaccurate prediction through imperfect knowledge of the moon’s motion.

The Nuremberg astronomer Johann Werner, in 1514, was probably the first to suggest that longitude could be determined by measuring lunar distances, the angle between the moon and a fixed star. The moon moves across the sky relatively rapidly. At a given time the angle between the moon and a particular star is the same for every observer who can see them both. The angle between the moon and a number of stars (called the distance) can be calculated ahead for certain dates and times, for a particular (prime) meridian. An observer measuring the angle would compare the result and his local time with the predicted result and time, and the difference between the two times would provide the difference in longitude. Werner’s method is feasible, but at the time it was technically impossible to develop sufficiently accurate instruments and lunar tables. Fernando de Magallanes’s astrologer in 1519 unsuccessfully tried to find the longitude in South America by conjunction of the moon and Jupiter. Failure was blamed on errors in the predicted astronomical ephemera.

Navigators sometimes used the variation of the magnetic compass for estimating their longitude. Because of the apparent relation between longitude and variation, sixteenth-century scholars designed methods of converting variation into longitude. For this to be successful in practice, however, the method requires a vast amount of data on the magnetic variation, which was not available until the eighteenth century, when Dutch navigators estimated their longitude with variation during crossings of the Atlantic and Indian Oceans.

As the attempts to solve the question of longitude at sea failed, the king of Spain, in 1598, offered a reward for anyone who came up with a practical solution. This example was soon followed by the Dutch States-General, the governments of France and Venice, and eventually in 1714 by the British Parliament, which offered £20,000. The result was that a great many inventors claimed these prizes. Among those responding was Galileo Galilei, who suggested that the eclipse and occultation of Jupiter’s satellites could provide a solution, as they are visible at the same instance for every observer. Lunar eclipse observations to determine longitude were done successfully by astronomer Edmond Halley near the Cape of Good Hope in 1719 and on land by Captain James Cook in Canada in 1766. However, to be successful for navigation, eclipse and occultation observations require great accuracy that, due to the movement of a ship, was almost impossible to accomplish at sea.

For the Royal Society of London for Improving Natural Knowledge (founded 1662) and the Académie Royale des Sciences in Paris (founded 1666), solving the question of how to find longitude at sea was one of the many subjects they engaged. An important step toward this was the founding of the Observatory of Paris in 1667, followed by Greenwich Observatory, near London, in 1675. Both institutions were commissioned to rectify the existing tables of stars in order to find the longitude of places for the use of navigation. Paris Observatory was the first to publish new tables of astronomical data for navigation, such as the daily celestial positions of the sun, moon and planets, and stars, which first appeared in 1678. From 1761 onward the publications also contained lunar tables, which made it possible to find longitude through the aforementioned method of lunar distances. The first accurate lunar tables had been calculated a few years previously by the German mathematician Johann Tobias Mayer. The British astronomer Nevil Maskelyne became the driving force behind the Nautical Almanac, which first appeared for the years 1767–1769 and also contained lunar tables. Another condition for using the lunar distance method was an accurate instrument for measuring the distance. That had been fulfilled in 1731 when John Hadley of London designed the octant (also named Hadley’s quadrant), a double-reflecting-angle measuring instrument far more accurate than the mariner’s astrolabe and cross-staff. About three decades later it was successfully transformed into the sextant, and later adapted as the reflecting circle.

The method of lunar distances (lunars) was soon firmly established as a reliable method to find the longitude at sea. James Cook was among the first to apply it, in New Zealand in 1769, using the Nautical Almanac and a sextant. For many years lunars competed with the method of finding longitude by use of a chronometer. This is a clock that keeps the time on the prime meridian accurately during a voyage, and was developed successfully by the Englishman John Harrison, whose fourth timekeeper was awarded the longitude prize of British Parliament. Until the nineteenth century the astronomical solution by means of lunars and the mechanical method by means of a chronometer were both used at sea. Eventually the chronometer prevailed, because the method to find longitude by that instrument was much simpler than through lunars. An important result of the availability of these methods to find longitude was that sea charts became considerably more accurate.

A clouded sky prevents the taking of a noon observation of the sun, and a weather condition like that can last for days. In the mid-eighteenth century Cornelis Douwes, a teacher of navigation in Amsterdam, developed the first successful method of double altitudes, taken before and after noon. Hence forward latitude could be found without the restriction of the traditional noon observation of the sun. Douwes’s method was improved and remained in use until the nineteenth century, when position line navigation gradually also came into use. This is the name for various methods by which, through an astronomical observation and subsequent calculation and construction in a chart, a ship’s position could be found at almost any time of the day. The first to develop a method by which a single observation of the sun or a star resulted in a position line was the American captain Thomas Sumner, in 1843. The intersection of several “Sumner lines,” taken from stars in different directions, provided a fix. In the 1860s the Sumner method was improved by French astronomers and naval officers, and by then celestial navigation had reached the level at which it remained until long after World War II.
Posted by Mitch Williamson at 6:59 PM