Causes of the Viking Age 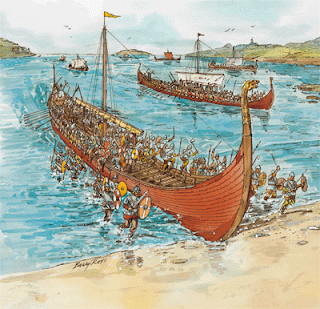 Historians and writers, from the Viking Age onward, have suggested many different reasons why, between the years 800–1100, there was this sudden surge of activity on the part of the Scandinavian people:

The account that the Norwegian trader, Ohthere, gave to King Alfred of also provides an insight into some of the reasons why Scandinavians traveled in the Viking Age. He mentions trading as one of the reasons for his journey, but also curiosity—he wanted to explore the regions of north Norway because he did not know what type of country and, perhaps more importantly, what resources he might find there. He discovered the existence of a number of Sami tribes and was able to impose tribute on them, and so to exercise a sort of economic power. Certainly the desire to acquire wealth—either moveable wealth in the form of loot or fixed wealth in the form of land or even wealth through employment—was an extremely important motive that helped to trigger the journeys of the Viking Age and that underlies many of the expeditions. The desire to gain political power was also important and was an extension of this economic motive: political power meant that you could impose taxes and tribute and control trade. However, there can be no one single explanation of the Viking Age: motives varied over the three hundred years for which it lasted and across the vast distances of . The only real agreement today is that many different factors played a part in triggering this wave of outward activity.
Posted by Mitch Williamson at 8:33 PM