BUILDING OF A GREAT SHIP 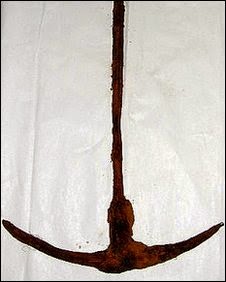 A Viking anchor. Crude but effective, it consists of a large rock between a forked branch and is held in place by a wooden post.

We have an account, dating from around 1200, of the building of a great ship by Olaf Tryggvason, king of Norway, near Trondheim in 998.

The winter after King Olaf came from Halogaland he had a great vessel built which was larger than any ship in the country and of which the frames can still be seen there. The keel that rested upon the grass was seventy-four ells [about 120 feet] long. Thorberg Skaffhog was the name of the man in charge of making the stem and stern of the vessel but there were many others, some to fell wood, some to shape it, some to make nails, some to carry timber. All that was used was very carefully chosen. The ship was long and broad and high-sided and strongly timbered. While they were planking the ship, it happened that Thorberg had to go home to his farm on urgent business and he stayed there a long time. The ship was planked up on both sides when he returned. That same evening the king went out with Thorberg to see how the vessel looked and everybody said that so large and beautiful a ship of war had never been seen before. Then the king returned to the town. Early next morning the king returned to the ship with Thorberg. The carpenters were standing doing nothing. The king asked them why they were doing that. They replied that the ship was spoilt and that somebody had gone from stem to stern and cut one deep notch after another down one side of the planking. When the king came nearer and saw that this was so, he immediately said that the man who had damaged the ship out of envy should die if he were found out, 'And the man who can tell me who it was will get great rewards from me.'

Then Thorberg said, 'I will tell you king who did it: I did it.'

The king replied: 'You must restore it to the same condition as before or you will pay for it with your life.'

Then Thorberg went and smoothed the ship's side until all the notches had disappeared. Then the king and all who were there declared that the ship was much handsomer on the side which Thorberg had cut, and the king asked him to shape it on both sides and gave him great thanks for the improvement. Afterwards Thorberg was the master-builder of the ship until she was finished. The ship was a dragon, built like the one the king had captured in Halogaland but this one was much larger and more carefully made in all her parts. The king called this ship Long Serpent and the other Short Serpent. The Long Serpent had thirty-four benches for rowers. The prow and the stern were covered in gilding and the freeboard was as great as in ocean-going ships. This ship was the best and most costly one ever built in Norway.

The picture is fascinating. The great ship is built on the orders of the king. It is constructed on the grass and, apparently, completed in the winter. The shipbuilder is clearly highly skilled but he is also a farmer with other business to attend to. His relationship with the king seems to be one of easy familiarity but he clearly enjoys the respect of the workforce. The completed ship is the object of great popular admiration.
Posted by Mitch Williamson at 1:38 PM