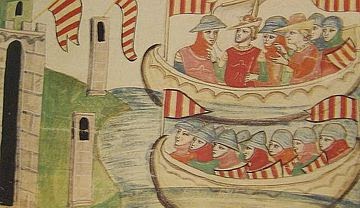 The Aragonese Crusade or Crusade of Aragón, a part of the larger War of the Sicilian Vespers, was declared by Pope Martin IV against the King of Aragón, Peter III the Great, in 1284 and 1285. Because of the recent conquest of Sicily by Peter, the Pope declared a crusade against him and officially deposed him as king, on the grounds that Sicily was a papal fief: Peter’s grandfather and namesake, Peter II, had surrendered the kingdom as a fief to the Holy See. Martin bestowed it on Charles, Count of Valois (and later also of Anjou), son of the French king, Philip III the Bold.

The conflict quickly became a kind of civil war, as Peter’s brother, King James II of Majorca, joined the French. James had also inherited the County of Roussillon and thus stood between the dominions of the French and Aragonese monarchs. Peter had opposed James’ inheritance as a younger son and reaped the consequence of such rivalry in the crusade.

In 1284, the first French armies under Philip and Charles entered Roussillon. They included 16,000 cavalry, 17,000 crossbowmen, and 100,000 infantry, along with 100 ships in south French ports. Though they had James’ support, the local populace rose against them. The city of Elne was valiantly defended by the so-called bâtard de Roussillon (bastard of Roussillon), the illegitimate son of Nuño Sánchez, late count of Roussillon (1212–1242). Eventually he was overcome and the cathedral was burnt, despite the presence of papal legates. The royal forces progressed.

In 1285, Philip the Bold entrenched himself before Girona in an attempt to besiege it. The resistance was strong, but the city was taken. Charles was crowned there, but without an actual crown. On 28 April, Cardinal Jean Cholet placed his own hat on the count’s head. For this, Charles was derisively but not unaffectionately nicknamed roi du chapeau (King of the Hat).
The French soon experienced a reversal, however, at the hands of Peter III’s admiral, Roger de Lauria. The French fleet was defeated and destroyed at the Battle of Les Formigues. As well, the French camp was hit hard by an epidemic of dysentery. Philip himself was afflicted. The heir to the French throne, Philip, opened negotiations with Peter for free passage for the royal family through the Pyrenees. But the troops were not offered such passage and were decimated at the Battle of the Col de Panissars. The king of France himself died at Perpignan, the capital of James of Majorca, and was buried in Narbonne. Peter did not long survive him.

Historian H. J. Chaytor described the Aragonese Crusade as “perhaps the most unjust, unnecessary and calamitous enterprise ever undertaken by the Capetian monarchy.” W. C. Jordan has blamed it for the attitude the young Philip took towards papal interference in French foreign policy upon his succession: a view with long-reaching consequences for Europe. The crusade’s legacy to France was slight, but Majorca was devastated as an independent polity. Peter’s son Alfonso III annexed Majorca, Ibiza, and Minorca in the following years. In 1295, the Treaty of Anagni returned the islands to James and the Treaty of Tarascon of 1291 officially restored Aragon to Alfonso and lifted the ban of the church.

The Battle of the Col de Panissars was fought on 30 September and 1 October 1285 between the forces of Philip III of France and Peter III of Aragón. It was a severe defeat for the French, who were already retiring over the Pyrenees when the Aragonese fell on them.
It was the last battle of the Aragonese Crusade, a papally-sanctioned war on behalf of Charles of Valois to secure the Aragonese throne from the excommunicate king Peter, who had conquered Sicily against papal interests. The battle followed on the heels of the naval victory at Les Formigues on 4 September.

Location and battle
The pass around the massif of Albères (568 m) was the main route through the Pyrenees in Antiquity. The Romans called it the Summum Pyrenæum. It has since been superseded by the Col de Perthus one kilometre to the northeast.

Having promised to leave the passage to the French king and his family, the Aragonese troops contented themselves with attacking the retreating French army, decimated by dysentery. Peter entrusted the vanguard to Ramon de Montcada and his Almogàvers, who massacred the fatigued French but spared the royal family. This first attack was followed up by a second attack by Roger de Lauria, the admiral of the fleet which had defeated the French at Les Formigues and had then disembarked to fight on land. The result of all this was a rout: the French were decimated further and it was a complete Aragonese victory. According to the chronicle of Ramon Muntaner, the festivities of celebration lasted eight days in Barcelona.

Legacy
When, in 1302, Charles of Valois intervened in Sicily in support of Charles II of Naples against Frederick III of Sicily at the head of four thousand knights in the pay of the pope, Frederick reminded him of the gesture of leniency and magnanimity which his father, Peter, had shown to Charles family at the Col de Panissars. Admitting a lack of gratefulness, Charles ceased hostilities and signed the Peace of Caltabellotta.

The naval Battle of Les Formigues (Catalan) or Las Hormigas (Spanish) took place probably in the early morning of 4 September 1285 near Les Formigues Islands, about 85 km northeast of Barcelona, when a Catalan-Sicilian galley fleet commanded by Roger of Lauria defeated a French and Genoese galley fleet commanded by Guilhem de Lodeva, Henry di Mari, and John de Orrea.
There are three almost completely different accounts of this battle in Ramon Muntaner, Bernard Desclot, and the Gesta comitum Barchinonensium. The Gesta places the battle at Las Formigueres (or Formigas), while Muntaner favoured a location off Roses (Rosas) to the north. Either Lauria or the French were ashore for the night and encountered by the other, or they were both at sea when the encounter took place. The accounts agree that it happened at night, which was unusual for medieval naval battles, but suited Lauria who was skilled at night-fighting. He used two lanterns on each galley to increase his apparent numbers. Ten to sixteen Genoese galleys under John de Orreo fled, leaving about fifteen to twenty French galleys to be captured, and some others sunk or burnt. The troubadour Joan Esteve blamed treachery for the capture of the French admiral Guilhem.
Posted by Mitch Williamson at 10:33 AM